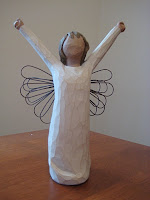 “Every man has his own courage, and is betrayed because he seeks in himself the courage of other persons.” ~ Ralph Waldo Emerson

The soldier who is fighting for freedom. A fireman who rescues a woman from a burning building. The teenager who fights a long battle with cancer. What do all these people have in common? They have courage.


For some people, courage seems to come naturally. For most of us though, it is a huge feat in facing our deepest fears and insecurities. No matter how it is used, demonstrating courage is very risky. It can end up in us getting injured. We could make a fool of ourselves in the process of being brave. Having the courage to face our fears can result in us being disappointed. Sure none of these situations sound very pleasant, but what is the price we are going to pay for sitting by and not facing that which makes us afraid?


Merriam-Webster defines courage as: the moral or mental strength to venture, persevere, and withstand danger, fear, or difficulty. The key words that stick out to me in this definition are “persevere” and “difficulty”. Many times, courage presents itself as people doing extreme things in extreme circumstances. That is not to say that isn’t true because of course it is. However I think that oftentimes we do not appreciate courage in the context of everyday occurrences and the incredible people who perform them.


Take the words “persevere” and “difficulty”. Don’t we all persevere through difficult times on a daily (even hourly) basis? Yes, we do. I have been struck lately by how many of these seemingly unnoticed displays of courage I have seen. You have maybe encountered them as well. It is demonstrated by someone who faces their fear of speaking in front of other people. You can see it in the person who is battling an illness but still gets up and faces each day. The father who accepts the fact that his son is gay. The woman who gets her heart shattered, yet opens it up to love again. The person who verbalizes an unpopular opinion. The man who wakes up every day to battle the demons that accompany his post traumatic stress disorder. These are just some of the unsung heroes in our midsts.

This all may not seem to be the kind of stuff that great novels are written about. However like Mr. Emerson was saying in the above quote, every man has his OWN ability to step forward, face his fears, and conquer them. So…how do you define YOUR courage?