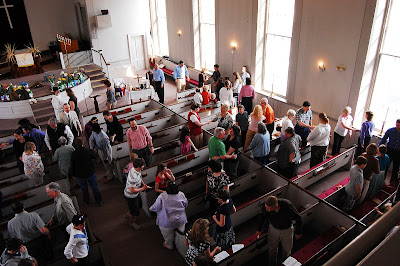 
My soul felt empty and my spirit was restless. This is how I felt several years ago when I made the decision to switch religions and attend a non-Catholic church. Difficult times can do that to a person, make you question God and wonder where he is. For some people, God does not have to be in a church; people say they worship God in nature or by their occupation. I tried that. It didn’t work for me. That’s not to say it doesn’t work for other people, but I was looking for something different.

I had been raised in the Catholic church and had dutifully gone through all the rites associated with that including CCD classes, premarital classes, etc. I didn’t agree with many of the church’s teachings but it was all I had ever known. As a result, I found myself in a spiritual crisis of sorts several years ago. I belonged to a Catholic church but rarely attended. The times I did go, I left there feeling as empty and lost as when I went in. I know many people have strong negative feelings about the current status of the Catholic church, but my point is not to bash the Catholic church. It’s merely to point out that for me, it was not meeting my spiritual needs. I did not find God there, no matter how hard I searched.

I really needed to find God too. My marriage was crumbling. I vacillated between being depressed and being more depressed. I had managed to isolate myself from a lot of family and friends. I found every day to be a struggle. I thought that if I could just find a place that gave me comfort, restored my faith in the world, and helped me find God, I might be OK.

I was lucky enough to be given a book written by an evangelical minister named Joel Osteen. Although he has quite conservative views about many things which I did not agree with, his book inspired me. He presented the possibility that the concepts of religion, spirituality, and God could be found in everyday life. His presented faith and spirituality in a way that was understandable and meaningful to me. Through his book, I came to realize that there may be a way to worship that would hold meaning for me. It didn’t have to be all about rituals and rules that felt hypocritical. Coincidentally during this time, one of my best friends asked me to be a godmother to her daughter. They belonged to a United Church of Christ (UCC) and it was through that experience of her baptism, that I had the opportunity to see a way of worshipping that held significance for me. I decided at that point, it was time to start exploring other religions and churches.

I only made it through two churches in my quest. Belchertown UCC (BUCC) being the first. I only even checked out a second church because I felt like I owed it to myself to have another Protestant church to compare it to. I stopped looking because after I checked out the second church, I found myself really wanting to go back to BUCC.

It’s a strange thing to go from attending a Catholic mass to a UCC service. I remember the first time I had walked in the door for my first service, someone actually greeted me and said hello. I was shocked. Then after realizing that the ceiling was not going to cave in from me walking through the door of a non-Catholic church, I made another observation: people were talking to each other before the service even started and some were even laughing. Laughing in a church?? For me, that was like hitting the jackpot!

A lot of things were different. There were no kneelers (because we didn’t kneel…bonus.). Communion was once a month instead of every week. The minister was a minister and not a priest so this one was married, with kids even. The congregation was the most diverse group of people I had ever seen gathered together in a place of worship. I subsequently found out that the church is open and affirming which meant that everyone was welcome regardless of race, sexual orientation, disability, income level, etc. This church also seemed geared towards helping other people through mission work. At the end of my first service at BUCC, I was sold. I knew I wanted to be there. I wanted to have what they had.

As it ends up, that was one of the best decisions I have made in my life, ever. My church has become another family for me. I went from barely getting myself to Mass at my old church twice a year to feeling lost if I didn’t make it to BUCC for a Sunday or two. In the process of attending, I have begun to develop the relationship with God that I was looking for. It’s an ongoing process but one that I build on every time I volunteer with church members to work at the soup kitchen, help organize/work a walk against hunger, or attend a healing service. I actually read the Bible from time to time which for some reason, was a foreign concept to me before. I have made friends and established relationships that sustain and nurture me. I have learned to more effectively work through conflict. I have learned how to feel comfortable praying. I feel accepted and I have learned to be more accepting. I have learned the value of community.


I have had the opportunity over the past several days to talk about my church experiences with different people. It’s been good for me to look back and appreciate how much finding my church and subsequently finding God again has changed my life. I know it’s not for everyone, but if you are feeling lost and empty like I used to, take a chance. Step outside the box and maybe check out a church you have always wondered about. You just never know what you may find. You may even find God again.