December 15, 2010
Well, I tried the blog thing again. I spent well over an hour trying to write some heartfelt piece about Christmas Eve when I was growing up. Then I hit delete because it seemed to lack depth and humor. So instead I am going back to my “list” format since it is easier (I deserve easy once in a while) and well, more fulfilling. 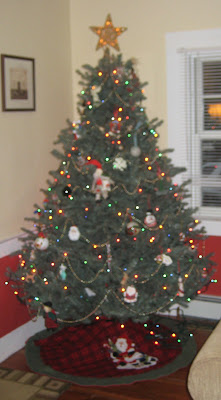 Today, my thoughts have been focused on Christmas but since I have mostly everything done I need to do (except for baking), I have time to write about it instead of getting ready for it. I cannot apologize for this. It is one of the few benefits to being out of the workforce.


• One of the best Christmas gifts I got as a child was an Atari game system. Everyone else had one (including our cousins) and Dennis (my brother) and I wanted one more than anything. Santa brought us one and now looking back, times were tough for Santa so I am not sure how he pulled that one off…maybe it is better not to know how he did….

• I admire the fact that there were years my mother had to work nights on Christmas but yet she and my dad managed to get all of Santa’s presents out before going to work and then stayed up to watch us open them in the morning.

• Christmas has the potential to bring out the worst as well as the best in people. There is nothing like bringing a whole bunch of family dysfunction into one room to really get the party going….

• I hate sending out Christmas cards…it is such a chore because unless I am going to take the time to write a long letter in it and make it more personal, I don’t think anyone is really interested in them. For Easter, Catholics give up something they like during Lent. I have decided Protestants should give something up for Christmas so I am giving up sending Christmas cards this year.

• I love spending Christmas Day at my aunt’s house in Hadley. I cannot imagine having it any other way.

• Nativity scenes are underrated. I love them. We had an awesome one under our tree when we were growing up that my grandfather made. I have no idea where it went though.

• Best Christmas shows ever are The Year Without A Santa Claus and A Christmas Story…does life really get any better than that?

• To all parents out there: Never underestimate the effect you have on your children at Christmastime. My greatest memories of Christmas as a child came from the times spent decorating the tree as a family and the expression on my parent’s faces while they were watching our excitement Christmas morning; the best memories are not of the presents themselves (except for the Atari!)

• Not everyone has a good Christmas season. Many people never have a good one. This is the time of year to remember that and try to make it a little easier on someone else.

• I used to know someone (OK, I was married to him) who hated the holidays and Christmas in particular. I thought about him today and felt nothing but pity and compassion for him. He has never experienced the spirit or the magic of Christmas. That being said, there were MANY Christmases where I had lost my Christmas spirit and magic. I truly got it back last year and am forever grateful for that.

• One of the greatest surprises and joys I have had in the past few months is being involved in a relationship with someone who values and embodies the spirit of Christmas even more than I ever could have imagined.

• If you celebrate Christmas and don’t go to church regularly, try to go this Christmas. You can even try a different church or a different denomination. It is Christ’s birthday after all, not Santa’s. One of the highlights (if not THE highlight) of my weekend will be 11pm service on Christmas Eve. It is truly magical.

• My current biggest pet peeve about Christmas: On Boston Common, there is a decorative lit sign that says “Happy Holidays” and next to it is one that says “Happy Hanukkah”. In the middle of the signs is a CHRISTMAS tree (if anyone says holiday tree, they will get slapped). I mean seriously?? OK, I know this is one of perhaps the most “politically incorrect” views that I have but to hell with it. I respect everyone’s spiritual beliefs and welcome all acknowledgements/signs regarding Hanukkah, Kwanzaa, etc. but at the end of the day I am a Christian and believe I have the right to freely acknowledge the phrase Merry Christmas rather than Happy Holidays. So why can there not be a sign that says “Merry Christmas” on Boston Common? Hmmm...

"What is Christmas? It is tenderness for the past, courage for the present, hope for the future. It is a fervent wish that every cup may overflow with blessings rich and eternal, and that every path may lead to peace." ~Agnes M. Pahro