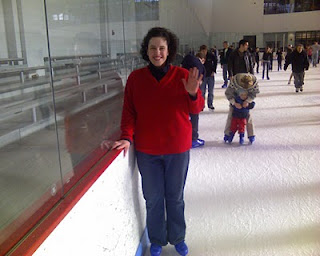 I am deathly afraid of ice. I mean DEATHLY afraid. I think it has something to do with a little incident that occurred when I was about twelve years old. I was chasing someone (the details are fuzzy-most likely it was my younger brother) and I slipped on a large patch of ice on the kickball field, resulting not only in a fall, but a blow to the back of the head as well. Guess that is what I get for chasing someone!


Anyways, I survived with what was probably a mild concussion but we don’t have that documented anywhere as my mother, the nurse, believed in handling these matters on her own and since there was no vomiting or weird behavior involved, I was good to go in her eyes.


I digress. So because of this ice fear and the fact that I never learned to skate as a kid (ice or roller), I don’t know how to skate, which has been OK for me until this past winter. All of a sudden I decided I wanted to try ice skating again. I say again because I tried it once about 15 years ago and never made it past 5 minutes of gripping the side wall in terror and I hated it. Now I am dating someone who can skate and the more he talked about it, the more I thought it must feel really neat to glide on ice. It must be such a freeing feeling. That is, if I could even stand on the ice.


The thought of ice skating not only terrifies me, but poses some concerns since I have a three year history of significant arthritis and I figured I would be a goner if I fell, which of course is a given. I do have this thing about getting ticked off over limitations because of my ongoing health issues and didn't want to miss out on something just because of that. We had been talking about trying ice skating all winter and my joints have been in amazing shape the past week so I figured what the hell, here we go.


We went up to an open skate at UMASS Amherst and there were a LOT of people. I said a silent prayer to God, as I looked down at the rink from the ticket counter, that some fool wouldn’t barrel me over and put me in traction. My first challenge though was just getting the skates on because rental skates at a college rink…yeah, they aren’t made for people who may have any weakness in their fingers. Then I was worried I wouldn’t be able to stand up in them but lo and behold I did!


I stepped onto the ice and literally was about 30 seconds away from a full blown panic attack. My poor boyfriend, bless his soul, had yet to see me ever have one in the six months we have been together as I have only had a few in my entire life. But it passed. I listened to his voice and hung onto him and the side of the rink for dear life. I have to say, he should have been a teacher as he is incredibly patient and actually was teaching me how to skate rather than just letting me hold onto him…although I did that too, the entire time.


To me, the fear of being out on the ice is more than just falling and hurting myself, although that is quite high on the list. It’s about not feeling in control. What if I can’t stop? What if I crash into someone and cause severe bodily harm? I asked my boyfriend why most everyone on the ice seemed so in control and he replied that it’s not a matter of them looking like they are in control, it’s a matter of them looking comfortable. And that he said, takes time.


We made it around the rink several times, with breaks in between as my joints weren’t used to working that hard, plus I was sweating like a pig from all the tension in my body and had to mop myself up a bit. Luckily this was not a first date for him and I. I’m sure I looked like quite a spectacle on the ice but I didn’t care too much about that. We glided for a while with my boyfriend in front leading me and then I actually used my feet here and there to propel myself, while still hanging on to him for dear life. Each time we went around I got a little braver and by the time we decided I couldn’t do anymore (neither could he supporting my weight so much!), I was much less afraid. He thinks the next time we go, I’ll be able to be on the ice without holding anything/anyone. I think he is delusional.


As I thought about it on the way home I decided that really, learning to ice skate for me is not that much different than life in general. It’s scary. It’s risky. You can get hurt. You have to put trust in people. You can make a fool of yourself. You can fall down. Like life though, every time you fall down, you have to get up. You have to keep trying.


I had the BEST feeling when I left that ice rink this afternoon. I felt like I accomplished something that up to this point, I always said I “couldn’t” do. Even though I can’t let go of my boyfriend yet, I skated. I did it. Like so many times in my life, I faced my fears and once again found out that I am stronger and more capable than I thought possible.