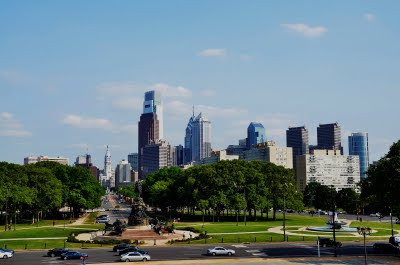 
I just had a fantastic weekend there and really have nothing negative to say about the place. My boyfriend (Chuck) and I spent three days in the city of brotherly love and I have to say, I would go back in a minute. We were there for the Dad Vail Regatta, which is the largest collegiate rowing event in the country. Chuck's son, Dan, rows for the University of Vermont. I had never been there before and we were hoping to get a little sightseeing in when we weren't at the river cheering our team on.


And sightseeing we did. In true Chuck/Chris fashion, we sucked the life out of every minute we were there. Dan's team only competed one of the two days (they didn't make the finals) and we had a little more free time on our hands than we expected. We did the touristy thing with Independence Hall, the Liberty Bell, and the Philadelphia Zoo (awesome place!!). The highlight though was this award winning bed and breakfast we stayed in called The Gables which is located in the University City neighborhood. It had it all from a large wrap around porch to fantastic Victorian decor to incredible breakfasts. It was truly a magical place.

I don't get away overnight very often and of course this experience, like all of my experiences, made me learn and think about a few things:


*Traveling is MUCH better when you are more spontaneous. I used to be so detail oriented when I traveled and actually, with everything in my life. I would have to plan every detail of a trip but what I have come to learn is that spontaneity offers you the chance to experience more and worry less. Maybe if we planned a little less in life, we would experience it more.


* Traveling with a chronic illness is challenging but CAN be done and done well. This is only the second time I have traveled this far from home since my autoimmune illness began in December 2007. Although I just preached about spontaneity in the above paragraph, when it comes to dealing with medical issues away from home, meticulous planning is best so that you can enjoy your time away. What I learned on this particular trip was that I do much better with driving (rather than flying) and staying in a bed and breakfast (rather than a hotel). With both, I have much more control over my environment in terms of humidity, medical equipment, being able to stop and stretch while traveling, the list goes on and on.


* I got to experience a tiny fraction of what it is like to be a parent while watching Chuck's son, Dan, row this past weekend. I have never had a relationship with someone who has children and I think it is very different when those children are young adults. Not better or worse, just different. I have been to most of his crew races over the past eight months and this one was a biggie. I was so excited for him when his boat won the first heat and felt so disappointed for him when they did not make the finals. I feel protective of him. Not that I need to. He's 21 years old. I'm not his mother or even his stepmother. I am just his dad's girlfriend yet, I realize how much I care about his well-being as well as that of his sister.

Not bad for a three day trip, heh?