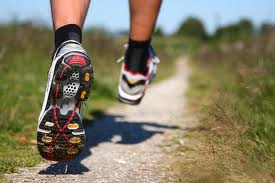 I ran today. I ran for a total of seven minutes. Seven minutes. That is a long time when you are trying to get your body to do something it hates you for. Except as a kid, I only ran one other time in my life and that was a few weeks in college when I decided jogging would make me lose weight. Well, it might have if I wasn't living on pizza and Ramen noodles. Anyways, I have now been consistently exercising for  about seven weeks, doing the aerobic part either outside or on a treadmill at the gym. I tend to get a much better workout at the gym than walking outside because I am not attached to the dog's leash. My cardiovascular status has improved dramatically, too much so. It is now outpacing my muscles and joints so that I have to work harder to get my heart rate up. I was using the incline on the treadmill to do this and now I am maxed out on the incline. Yay me!
So about three weeks ago, I felt this sudden urge to run on the treadmill which has actually never been attempted before by me. I also needed to get my heart rate up more. I upped the speed and off I went. In the back of head, I was thinking what a terrible idea this was for my arthritic joints but I just wanted to see if I could do it. I did...for all of fifteen seconds. I am not even kidding. I thought I was going to die. But I did it, I ran fifteen seconds. Then I decided that Rome wasn't built in a day and neither would my body, so I was going to try and run fifteen seconds every time I walked and see what happened. As the days go by, I try to increase the time I spend running and today felt like a big step. I did seven minutes. Granted, it was seven minutes split up in three different intervals (3min/2 min/2min) but well, who the hell cares? I can run!
Anyone that knows me well probably thinks I am an idiot trying to run on a treadmill after all the joint pain I have been complaining about the past few years, but here's the thing...exercise is good for you...it helps arthritis. It helps asthma. It does wonders for my stress level and emotional well-being. The whole exercise thing has been pretty brutal to begin with, but nothing compared to the pain I was feeling in my joints 58 pounds ago. Now, getting exercise doesn't mean I have to run. There are other ways to increase my workouts, such as the bike and elliptical. So why am I putting my body through those VERY long seven minutes? Simple...because I can. I have had so little control (or so I thought) over my body for so long; this is me taking charge. Saying I can run seven minutes puts me back in the driver's seat. It is my way of doing something good for my body that makes me feel strong. It is one more thing I can now say "I did" about rather than "I can't."
I am still in the process of figuring out an exercise schedule/routine in which I can deal with the aftermath of in terms of muscle/joint pain. To be honest, I may decide that the running thing may just not be in my body's best interest or I may post an update a few weeks from now saying that I ran for twenty minutes. For today though, I am just content in saying that I did a little more than yesterday...