The Fury of Mother Nature

June 05, 2011
I sit here on my couch, in my home, freshly showered with clean clothes on. I have my boyfriend sitting next to me working on his computer and my dog resting quietly on her blanket. We have a roof over our heads. There is food in the refrigerator. We have electricity and running water. Except for a sunburn and very irritated eyes, I am comfortable.

That is not so for many families living in communities surrounding mine. Here in the western part of Massachusetts on Wednesday June 1, 2011, several tornadoes ripped through this part of the state leaving a pattern of devastation so rarely, if ever, seen in this little hub of New England. We just don't get tornadoes of this magnitude in this part of the country. It is something that we hear about happening in Missouri or Kansas. Massachusetts averages two tornadoes a year and to be honest, you usually never hear about them. Most of us have only seen photos on TV of torn off tree tops and flattened homes. 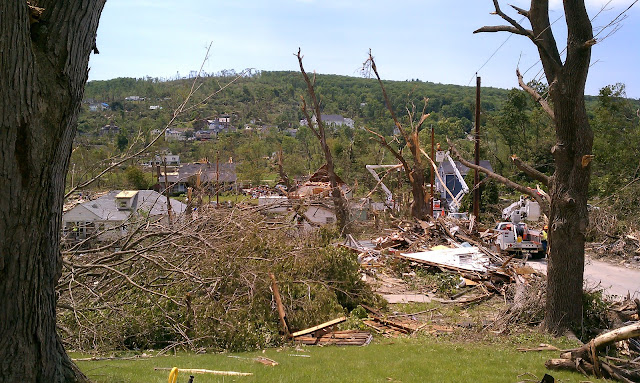 I really wanted to find a way to help some of the victims from this terrible tragedy and was fortunate enough to be able to join my church to spend a day in the local town of Monson to assist a family and their neighbors with sorting through the debris of what were once their homes. We brought supplies and just as importantly brought some hope and some faith. I had lived for two years in the quiet town of Monson many years ago and therefore had a soft spot in my heart for this quiet and friendly town.

Nothing can really prepare you for the sight of the landscape you see when you approach a part of a town that has seen a tornado tear through it. The trees are gone, or at very least the tops of them. Whole buildings are collapsed. There are wires down on the street every which way you turn. National Guard personnel stand on the street corners and walk down the sidewalks. As we drove through, it seemed to me that the scene might be similar to a war zone as depicted on TV. There are claims adjusters and other official looking people going from site to site. People's belongings are strewn all over not only their lawns, but on their neighbor's neighbor's lawn. 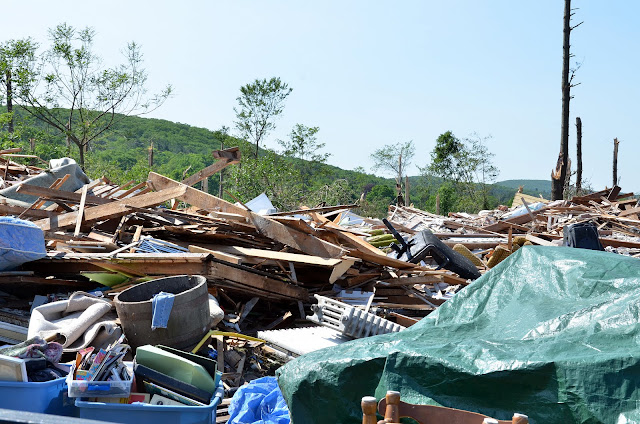 We sorted and we sifted. We made piles. We lifted, hauled, and carried. We gave hugs. We tried to console without letting the victims see our tearful eyes behind our dark sunglasses. Part of me felt like I was privy to the insides of someone's life as I was sorting through their clothes and other personal belongings. I couldn't help but imagine what it would be like to be so displaced; to have strangers sorting through your belongings and in less than two minutes, to have your entire existence as you know it changed forever. I don't know personally the people that we helped today, but I knew that I just wanted to turn back the clock for them and freeze May 31, 2011 so that they never had to experience the loss and sorrow associated with June 1, 2011.

However despite all of the loss, there was so much hope. We heard several stories of survival. I was shown a small space underneath the complete collapse of a home where a woman and her 12 year old child crawled out from the basement. I saw children about 11 or 12 years old walking the streets offering food and water to the residents of the neighborhood as well as to the men and women working to help restore power lines and such. I witnessed an incredible amount of supplies being hauled into the neighborhood; people sometimes having to carry them for a mile or so because vehicle access was limited.
It's funny because oftentimes we go about our day to day lives and get so caught up in what is NOT good in this world....the people who hurt us, scorn us, or just plain aggravate the hell out of us. But I have to tell you, there is a lot of good in this world. There is also a lot of human resiliency. When people are faced with the most adverse of circumstances, they find something deep inside themselves that they didn't know that they had. They rise to the occasion. 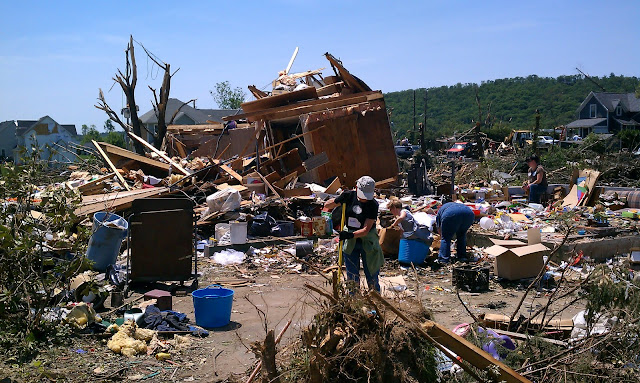 I started writing this blog posting last evening as this all took place yesterday, but I had to put it away for a bit before I could finish it. Sometimes when an experience is overwhelming to me, I have to write down some initial thoughts and then come back to it. It can be because I am having a difficult time with the writing. In this instance though, I had to come back to it because the emotions of the day were so overwhelming to me yesterday. They still are, but the shock has worn off a bit. I feel like I was part of a process that was so raw on a human emotional level. There was something so deeply personal and humanistic about helping these disaster victims. People like you and me. People who, by chance, live in the path of Mother Nature's fury. People who will face their obstacles, rebuild, and continue on. 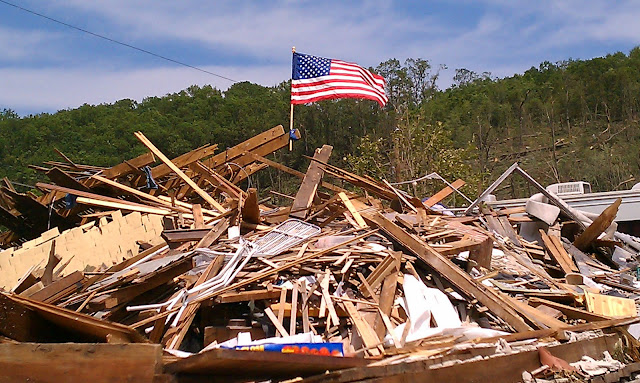