August 17, 2011
"My father gave me the greatest gift anyone could give another person, he believed in me. " ~ Jim Valvano 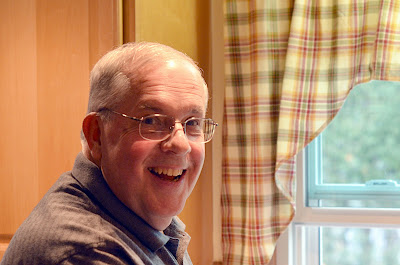 Did you ever have a person say something trivial to you and it triggers a whole thought process? This morning my boyfriend, Chuck, sent me an e-mail saying that an animal of some sorts got into our trash last night and made quite the mess. He then suggested we put some bleach in the large trash container to help with the smell and discourage the critters who roam around on our wooded property. My first immediate reaction, which I of course told him in my reply, was that we should use ammonia instead. My dad always poured ammonia on the garbage on trash day when we were growing up. And it always worked. I can still distinctly remember that smell...


Today my father turns sixty-four years old. I find it difficult to wrap my head around that idea. I am well aware that both of my parents are getting older and not as invincible as I once thought they were. I am also reminded lately of the fact that the day is drawing nearer where I am going to be looking after them more than they are looking after me. But oftentimes in my head, my dad is still the thirty something guy riding the old wooden roller coaster with me at Mountain Park. He is the young dad chasing the two punk kids who stole my little brother's bike through the streets of West Springfield. He is the dad who made sure that I knew the only way to succeed in life was through hard work.


When I was young, I was always compared to my mother both in relation to personality characteristics and physical attributes. Not that I am complaining! I do possess a lot of her wonderful qualities and I am so grateful for that. As I got older though, I realized that I possessed just as many of my dad's qualities...


His need for neatness and order.

His ability to laugh freely.

His sense of humor.


While planning my parent's fortieth anniversary party last November, I was going through old photographs and it was shocking to me when seeing photographs of him in his younger years, how similar we do look. Seeing his smile in those pictures was just like looking into a mirror. I had never quite noticed that before...


As the years have gone by, I have learned the art of accepting people for who they are and my father is no exception. He is not an openly emotional person and oftentimes a man of few words. I am completely the opposite in that regard, sometimes wishing I could be less emotional. As I have struggled through one personal crisis after another in recent years though, my father has always been my silent supporter. Even without words, I know he believes in me. I am not sure exactly how I know this. Maybe from statements my mom has made to me. Maybe from comments I have heard him make to my doctors. Maybe just from his silent presence when he helped me move after my divorce. Regardless of how I know, the fact remains...I do know.