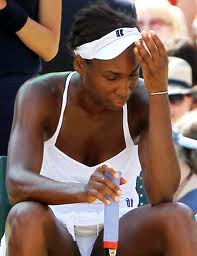 Big news of the week: Venus Williams has Sjogren's Syndrome. Here is a news segment where she discusses her recent diagnosis: Venus Williams Opens Up On Illness.
The thirty-one year old professional tennis star broke the news on August 31st during the U.S. Open. I have to say, I don't think that I could have been more surprised. Maybe because I am still reeling a bit from my own diagnosis less than a month ago (finally!!) Or maybe because Venus Williams is an athlete and has the incredible body of a well-trained one. Perhaps the thing that is throwing me off the most since Venus made her announcement is just seeing "Sjogren's" all over the media. The word that makes people look at me with that confused look on their face when I tell them my diagnosis, is now all over the New York Times, ABC, and ESPN. It is quite surreal.

Not that having Sjogren's in the news is a bad thing by any means. I have to admit, one of the first reactions I had when hearing the news of Venus's diagnosis was relief. Relief that maybe finally this terrible illness will get the attention that it so desperately needs. Maybe then it will get more funding for research. And maybe, just maybe, new treatments will be developed that will help improve the quality of my life and the 4 million other lives in this country affected by the illness. I am not exactly proud
of the fact that I was thinking this but hey, I am human after all. A human who happens to be in a LOT of pain this week and would do just about anything to feel better!


I pray that in the days and weeks to come, the media does Sjogren's the justice that it deserves. If there is one topic in this world that I feel like I am an expert on, it is Sjogren's. That is what happens when you spend years on and off researching an illness. Because of that, I cringe when I see misinformation in the media such as that Sjogren's is a rare illness. It is the second most common autoimmune disease and it affects four million Americans. Hard to diagnose? Yes. Difficult to treat? Absolutely. But not rare. There was also an article put out by the New York Times this week stating that Sjogren's causes Rheumatoid Arthritis. Wrong. Sjogren's can result in arthritis (usually inflammatory), but Rheumatoid Arthritis is a whole illness in itself which can occur in combination with Sjogren's, but not as a result of it. I know this seems like splitting hairs on terminology and well, it is. However I also feel strongly that it is important for the unknown number of undiagnosed patients out there to have the most accurate medical information in the media that we have available. I know, I know, very high expectations! 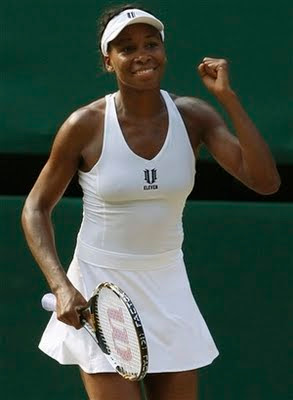 Since the news broke this past Wednesday though, the other reaction I had when I heard the news has become even stronger. That reaction is one of compassion. As I read various Facebook pages for both Venus and the Sjogren's Syndrome Foundation, I read post after post from Sjogren's sufferers telling Venus and other readers how they are hoping she will be an advocate and new face for Sjogren's so that it does get the attention it needs. I have to say even though I agree with these sentiments for the long term, they also really frustrate me. The woman just got diagnosed with an illness that will forever change the course of her life.  This is not the time for her to worry about being a celebrity; it is a time for her to figure out how to fight this thing. My impression of her from the media and especially most recently from an interview on Good Morning America, is that of a very level headed, strong, and well-spoken person. I believe that someday she will take on the challenge of being a spokesperson for Sjogren's, but now is not that time! Let us give her the time to digest the news and work with her physicians on an appropriate treatment plan. And let us give her the opportunity to find her way on this crazy Sjogren's journey...