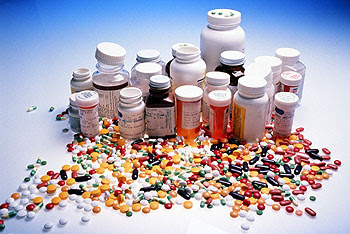 I am more disgusted than usual with the health insurance and pharmaceutical industries lately. Health care in this country is dictated by politics and money which of course in no way benefits the patient. However in an attempt to turn negative experiences into constructive information that may help other people, I am going to try and make this a blog entry more about empowering other consumers and less about my rant regarding the terrible demise of health care in this country. Because except for being an active, registered voter, I feel powerless about changing the health care situation in this country. However I do have some control over figuring out how to get my medical needs met and then passing that information on to other consumers.

I have a prescription steroid inhaler that has a copay of $50 per month which is considerably more than other inhalers on the market. The reason I need this particular inhaler is because it is the only steroid inhaler on the market for my autoimmune induced asthma that has been documented to not cause a fungal infection of the mouth called thrush. When using previous inhalers, I have had a terrible time with thrush spreading into my esophagus and causing complications which have included difficulty swallowing. Then I have to take potent antifungal medication to clear the infection. Since starting this new inhaler (Alvesco), I have been thrush free. This new inhaler is much more expensive and I think part of this is due to the fact that it is the only one like it on the market.

$50 may not seem like a lot to spend on something that works so well, but it is when you are on a fixed income, you have at least seven other prescriptions, and you spend approximately twenty-five percent of your income on medical care every single month. An income that is only sixty percent of what it used to be three years ago. I am not revealing all this information because I want my readers to feel bad for me. I actually hesitate to reveal these details because sometimes people (i.e. my well intentioned brother) take these comments as a statement that I do not have enough money to survive. So let me just clarify that I can manage. We all have to make choices in life and I manage because I make my medical expenses a priority. I get by month to month because I always look for the best ways to manage my medical costs and I am very good at managing my finances. I manage month to month because I am fortunate enough to share living expenses with someone who is always looking out for my best interests. I am quite blessed because I have a family behind me who would never let me go without a necessary medication and would do everything in their power to pool resources to make sure I have what I need. I know that there are patients out there who have no health insurance and minimal available resources to them.


But here's the thing. I am fiercely independent now. Although getting sick and incurring these medical expenses is not my fault, it is my responsibility to figure out how to pull my weight in order for my boyfriend and I to manage our expenses. So when my steroid inhaler dose got increased recently and the insurance company started charging me a double copay every month ($100), I couldn't just sit by and say "oh well, that's how it works." Because I never know when another unexpected medical expense is going to come from around the corner.


So what did I do? Well, I started by complaining about it on Facebook. This was a good idea because there were people on my friend's list who had some helpful suggestions. I also contacted my pharmacy to see if they had any suggestions of how I could avoid the double copay. I went to the website for the Alvesco inhaler in the hopes of finding some type of discount program for this medication. They had a great discount program which would reimburse up to $75/each month towards my copay. Too good to be true? Of course! In the fine print it stated that because of state legislation, only one state in the union was ineligible for the discount program and of course that state was Massachusetts.


This all brought me to this morning which is when I decided to call the doctor who prescribes the inhaler and see if he had any suggestions. I spoke with his nurse who was quite helpful. We discussed a few options and came up with a plan. She said she would put aside the last two samples she had in the office of the inhaler for me to pick up tomorrow. Although she didn't have any samples two months ago when I was there, she had them now. Lesson learned: ALWAYS call your doctor to check for samples!


These samples would get me through to my next appointment with my pulmonologist next month during which time we could try and figure out if there was a way to rewrite the prescription so I only pay one copay. What the nurse suggested next though was even more critical. The nurse told me to see if I could use a mail order pharmacy through my insurance company. I had used one of these a long time ago, but haven't investigated this option since being diagnosed with the autoimmune disease because my medications were changing on a monthly basis. Mail order programs give you a three month supply of the same medication at a time and that wasn't practical for me. Then I pretty much forgot all about it. Now I have several medications that are the same dosage for periods of time so I decided to check out this option.


As luck would have it, my insurance does have a mail order pharmacy called Express Scripts. To be honest, I did a Google search of reviews for them and those reviews were not favorable at all. However after reading their website, I decided that at this point, the amount of money I was going to save was worth taking the chance with this company. The process was very easy. I called their 1-800 number and told them I wanted to start up an account and see if my regular medications were covered. Because they work with my insurance company, they already had my drug and doctor information. They would call the doctors for a new prescription for a 90 day supply of each medication. I told them which medications I wanted, double checked the doses, doctor names, and doctor phone numbers. They told me how much they would cost and how the payment process works.


For four of my medications I paid a two month copay for a three month supply of medications. The exception was one of my thyroid medications which is on a special discounted medication list and only cost me $3/month. By the end of the phone call, I had saved 40% on five different medications. The other advantage is that all of my reordering can be done online and I don't have to frequent the pharmacy as often. That comes in handy when you are not feeling well. I am sure there are disadvantages to the program, but I am going to remain optimistic and hopeful that it will remain to be as easy and cost effective for me as it was today.

So those are some of my tips for saving money on prescriptions. The biggest point I want to make sure that I make here is to use your resources as wisely as possible. Contact your pharmacy, doctor, and insurance company. See what options are available and make sure to be open minded to what resources are available out there.

What ways do you have to save money on prescriptions?