Doctor, I Trust You

November 13, 2011
"I observe the physician with the same diligence as the disease." ~ John Donne 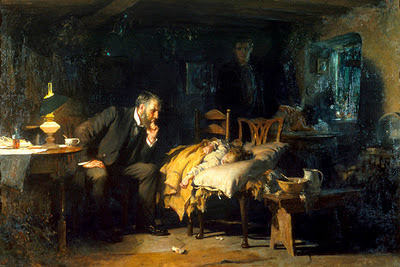 For the most part, it is difficult for me use those two words in the same sentence, unless the prefix "mis" is used in front of trust. In some ways, my mistrust of doctors is surprising because in general, I am a very trusting person. However like any other relationship, the patient-doctor relationship is vulnerable and when that trust is broken over and over again, it is then difficult to enter into another patient-doctor relationship with the confidence and trust that is needed to build a cohesive team.

I have very good reasons not to trust doctors. To start with, I am a registered nurse. I have spent a lot of time working in a teaching hospital and have seen firsthand the potential and actual mistakes that can be made when treating a patient. I have witnessed more times than I can count, novice and experienced doctors alike make grievous mistakes that sometimes have been thwarted by nurses and other medical professionals such as pharmacists. Sometimes, those mistakes do reach the patient.


However my bigger trust issues with physicians is due to my years of experience in being a patient. My first bad experience came when I was twenty-four years old and had Stage Two Hodgkin's Lymphoma, which was misdiagnosed for over six months because two different doctors did not think it was probable for someone my age to have cancer. Then I was told several years later that heart palpitations I had been experiencing were due to anxiety; only to find out four years later that I had an actual conduction problem in my heart which was causing my heart to not function properly (AV Nodal Reentry Tachycardia). The third incident occurred over the past several years when I was battling a host of physical symptoms and was told by doctor after doctor that they could not find anything wrong with me. I was convinced I had an autoimmune disorder. Several doctors were convinced I was crazy. That myth was dispelled when a lip biopsy came back conclusive for an autoimmune disorder called Sjogren's syndrome.

It would be easy to sit back after all of this and say "to hell with them" but the reality is, I need doctors. I also need to be able to trust the people who have my life in their hands. Easier said than done. So how do we do it? How do we build a trusting relationship with our physicians?

Like any type of relationship work we do in our lives, we have to start with ourselves. We have to look at what we do on our end that acts as a barrier between us and our doctor. For me, it was a matter of checking myself at the door. Because no matter who the doctor was or what the problem was, I always thought I was right. Of course I didn't always let my doctor know this. Sometimes I would verbally disagree with a diagnosis or a treatment idea, but then other times I would go along with what they said, yet never really trusting that they had the right answer. The problem was, I was confusing thinking I was right in terms of medical knowledge with being right in terms of listening to my own body.

The attitude of not trusting what my doctor was saying was counterproductive because in order to heal, you need to believe and have faith that what you are doing to your body to heal it is making you strong and well. I fully understand that I got this attitude from incident after incident of being let down by doctors, subsequently putting my life at risk. After a while though, you have to stop judging people based on something wrong someone else did to you in the past. It doesn't mean we cannot be educated and well informed patients. It means that we are partners with our physicians and we need to hold up our part of that relationship.


There are several other steps I have taken to build a trusting relationships with my doctors (I have several). To start with, I doctor shop. I find a doctor who is going to treat me with the care and respect I deserve. Because if they do, then when differences arise, we can attempt to work them out. I don't doctor shop intentionally and I know this is frowned upon by the medical community, but if I have a doctor who either dismisses my current health concerns or cannot figure out what the problem is, I leave. Pure and simple. I may have worked on checking my cockiness at the door in terms of my medical knowledge, but I know my body. I know when there is a problem. Because of this tactic, I am on my fifth rheumatologist in three and a half years. And you know what? After all that time, I finally found one who correctly diagnosed the autoimmune disorder I have and is working with me to find the most beneficial medical treatment for my disorder. 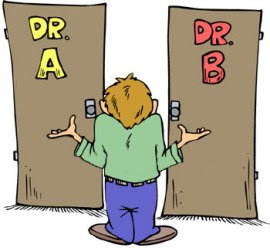 I go to my appointments prepared and well informed so that my doctor takes me seriously. I ask questions, lots of questions. Not questions to challenge their medical knowledge, but questions that require an explanation for a diagnosis, treatment, or medications. Answers that will help me to understand what the plan is and subsequently help bolster my confidence in them. Finally, I try to remember that at the end of the day, my physicians are just human. They are not perfect. They are not God. They are people like you and I who happen to have a lot of education; which enables them to be called "doctor". Therefore, when one of my specialists forgets a detail about me and asks me again because she just returned from a weeklong conference on the other side of the country, I take a deep breath and just remind her.


Trust takes time to build. And patience. I am now starting to reap the benefits of taking these steps towards building trusting relationships with my doctors. I am more receptive to trying new approaches to managing my illness, whether it is conventional or alternative. I am less anxious. Although I still keep careful track of what is going on with my medical treatment, I am not lying awake night after night wondering if someone screwed up. I am confident in the choices I have made in my medical providers and because of that, I can give up some of the tight fisted control I have felt I have had to maintain over the past sixteen years or so.

I feel a little lighter.