April 26, 2012
"The water is your friend. You don't have to fight with water, just share the same spirit as the water, and it will help you move." ~ Aleksandr Popov 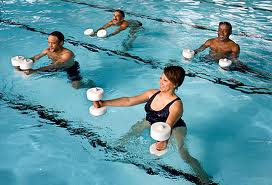 I have not been in a regulation sized pool or swam a lap since freshman year of high school. Sure, I have been in backyard pools and in the ocean but not a REAL pool. I learned to swim later than most kids; I was about thirteen or so. As an awkward, geeky, and somewhat overweight freshman in high school, the swimming portion of our physical education classes was a nightmare for me. I will spare you the details but at that age, you can just imagine.

Anyways, I recently changed gyms and one of the major factors in that decision was because this gym has a pool and I thought it would be a good way for me to get the exercise I need when my Sjogren's symptoms are flaring up; which can make even going for a walk difficult at times. However I had fallen five weeks ago and sustained a nasty wound to my knee which needed to fully heal before I could go in the water. This week it finally healed.

I had a lot of doubt about my ability to swim laps without making a spectacle of myself (completely unfounded worry) and I figured I would start my new found aquatic life with a water aerobics class. Of course this means going out in public in a bathing suit; which I had some anxiety over. It actually makes no sense because I go to the beach and walk around there in a bathing suit, but there was something about doing so in a pool area, at a gym with fit people, that seemed more intimidating to me. I hate the fact that even at the age of forty, I still concern myself with issues like this.

But of course I sucked it up and was constantly telling myself that people are there to work out and not notice how fat I may look in my bathing suit. Be brave I told myself. This is not high school. And I was fine.

The second I got my body in that pool, I felt like I was in pure heaven. I have struggled so much with my autoimmune illness and physical challenges over the past several months. I have also struggled with body image issues, as obviously noted above, related to not only the physical pain and fatigue I experience, but also related to the side effects of my steroids. These have included swelling, weight gain, and my hair falling out in clumps on a daily basis. In the pool though, my body feels less broken. It is lighter. I feel my muscles relax. I feel capable and strong. I even swam two laps doing what I think is a breast stroke. And I didn't have a heart attack.

There are multiple issues to consider when someone with Sjogren's syndrome spends time in a pool. Chlorine can be irritating to my already very dry eyes as well as possibly to my lungs. I did not put my face in the water today at the class, but I love to swim underwater. I think investing in a pair of swim goggles might be in order. I also need to remember to put in eye drops immediately before and after being in the pool. I am hoping that the chlorine will not be a problem for my allergies or lungs but if it does become an issue, that's what I have a pulmonologist for. Those of us with Sjogren's also struggle with severe dry skin issues which can be exacerbated my chlorine. Luckily, I live five minutes from the gym. My intent is to plan my morning so that I immediately go home and showe and apply body cream after being in the pool.


The class itself went well. I was not sure that I was getting much of a work out because my heart wasn't pumping as hard as it does with other forms of exercise. And of course there was no sweating involved. We did something called water walking which involved a flotation device thing. We did stretching and aerobic exercises in both the shallow and deep ends. We also used light weights with some of the exercises. It didn't even really feel like I was exercising at times although towards the end of the hour, I did notice I was appropriately short of breath. Time will tell because if I am sore tomorrow morning, then I had a good work out. Also I had an excellent night's sleep last night and I have been exhausted since leaving the gym. It doesn't feel like autoimmune related fatigue or coming off prednisone fatigue. It feels like your ordinary exhaustion from exercising.


Unfortunately, I also had to bring Molly for a walk this morning after the class as she has not been getting out enough and is acting like a total nut at times because of that. So now I am completely exhausted but besides a headache, I can say that I don't have any pain. It is still a challenge for me to plan my days so that I can appropriately pace myself physically in terms of getting in my physical therapy, strength training, and cardiovascular work outs. As well as walking Molly, housework, medical appointments, shopping, cooking meals, etc. Before Sjogren's, I could just plow through my day, but now my body requires frequent rest periods. It will all come together eventually I suppose. I have no choice but to make it work.

And the best part?