Partners In A Healthy Lifestyle 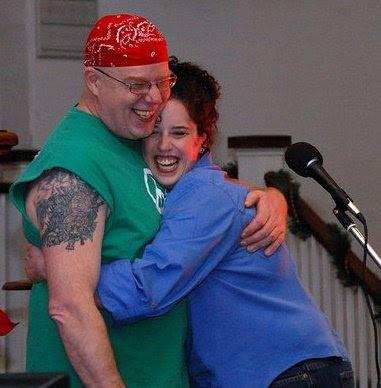 The very first time I ever noticed my fiance, I was sitting in my usual pew at church. He was walking down the opposite aisle of the church to sit in his own pew by himself. He had a certain presence about him. Maybe it was his long trench coat that hung on his 6'2" frame or his stylish cowboy hat. Maybe it was his unassuming presence or the gentle way he looked at people when they were talking to him.


The very first time I knew, although I was in denial about it for months, that I was very attracted to my fiance, he was kneeling by my side after church, offering to lend me some of his movie collection as I was trying to recuperate from a very difficult hospitalization. I subsequently fell in love with him for a million and one reasons. Attraction was a part of that love. I was attracted to him on an emotional, mental and of course, physical level. In my eyes, I never saw him physically as anything less than perfect.


﻿So because of this, it came as a surprise to me when last year he mentioned to me that he had lost weight since we started dating in September 2010, that this weight loss was intentional, and that he wanted to lose more. He told me how much he weighed when we started dating and again, I was surprised. I had never thought of him as overweight and to me he had been perfect just as he was when we started dating. I guess that is what happens when the pheromones are in charge! I found him attractive on all levels and his weight was irrelevant to me.


Ignorantly thinking that men are not as concerned about self image as woman are, I didn't think much of it and 2012 came upon us. I drastically changed my nutrition plan, eliminating gluten and dairy (to help control my autoimmune symptoms) from my diet which meant that at dinnertime, Chuck did too. After my Guillain-Barre fiasco in February, I got more serious about my health. I started exercising regularly and fine tuned my nutrition plan; eating healthier than I had in my entire life. Because Chuck and I are together most evenings and weekends, my healthier eating affected him as well. It was important to him that I be as healthy as possible and do whatever I needed to do to try and manage my autoimmune illness and although I offered, he never considered the possibility of making two separate meals when we ate together.


And as the months have gone by, I have noticed the changes that he has made one by one. Getting to the gym more often. Eating smaller portions at meals. It has been interesting to watch because he is not dieting, but rather just making lifestyle changes, one at a time. It has been great because to be honest, it has made my lifestyle changes a LOT easier when there are not always so many tempting foods in the house and when your partner doesn't want to eat out all the time. That is not to say that we don't treat ourselves or indulge from time to time but when we do, it is without reservation or guilt.


He has become my biggest fan and cheerleader in my quest to become healthier and lose weight. For the first time in my life, I have a partner that supports my mission. It is also the first time I have been in a relationship where I am losing weight rather than gaining weight. And he has never ever complained. Not once. He eats every single gluten-free, dairy-free, vegetarian, sugar-free, cardboard tasting recipe I have ever tried. Together we figure out which ones we both like more than others and then I experiment some more so we are eating food that we truly enjoy. When he cooks on the weekends, he cooks gluten and dairy-free. He makes sure the ingredients are measured so that I can then calculate the Weight Watchers points as I do the Weight Watchers program in addition to my gluten and dairy-free lifestyle.


I have come to realize that we have become quite a team. We each have our own strengths and weaknesses when it comes to nutrition and exercise. He is better at staying away from take out and fast food. I am better at making sure we have vegetables with our meals. He is better at the fitness aspect of things and has been good in helping me construct an exercise plan that is doable with my illness. I am better at meal planning and keeping the kitchen stocked.


I have blogged about and been very open about my health and weight loss journey but here's the thing. It is not my journey. It is OUR journey.


That man that I was so attracted to two years ago? I realized when I looked at him about two weeks ago that he is NOT the same man. Not physically. I was so wrapped up in my own journey that although I knew he was losing weight and I could wrap my arms around him a lot easier, I was not fully aware of his amazing transformation.


I saw him getting dressed that morning and just exclaimed "Oh my God!"

I exclaimed a lot of other things but well, this is a public blog so we will leave it at that.


I have to admit, it gives me a twinge of guilt now and then when I look at him. I am not any more attracted to him than I was before he lost weight but I cannot lie. He looks great. I fully appreciate the changes in his body and I have to wonder if on some level that makes me a bit shallow.


But then I stop and think about how concerned I was about his elevated blood pressure at his doctor visit last year before he lost weight.


I stop and think about how maybe this weight loss might prolong his life and therefore our time together.

I stop and think about how happy he is with himself and how proud I am of his accomplishment.

And I realize that those are the things I am really appreciating.