"A hero is an ordinary individual who finds the strength to persevere and endure in spite of overwhelming obstacles. " ~ Christopher Reeve 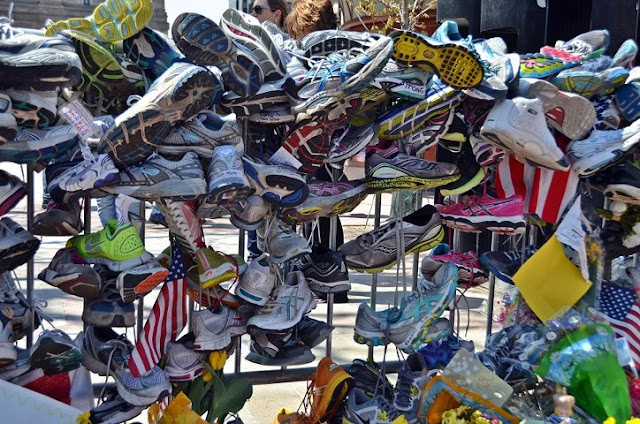 On April 15, 2013, a terrorist act was committed on the people of Boston, Massachusetts as well as on the United States of America. Two young men, ages nineteen and twenty-six, decided for whatever reason, to bomb the finish line of the Boston Marathon. Three people were killed at the finish line and another person was killed by the suspects several days later. Two hundred and sixty-four people were injured. Lives were lost. Limbs were lost. Families were torn apart.


The day of the bombing, I had just shut off the television to go and do some housework. My fiancé called from work to tell me the news. He told me to turn on the television. I was in the middle of something at the time and was distracted. I thought he didn't know what he was talking about. How could there be a bomb at the Boston Marathon? Not my Boston. Not our Boston.


Five minutes later I realized that my fiancé knew exactly what he was talking about. The horror was all over the news. Pools of blood on the ground and people running in terror. Fear gripped me as I tried to recall in my mind if any of the runners we knew were running that day. The fear continued as I ran through a list in my head of all the friends and family we knew who lived in Boston and the surrounding area. What if one of them had been killed?


I also had other worries. Two bombs going off in Boston could mean what next? Was the state under attack? Hell, was the country under attack? There were so few details at that point and living under two hours from where this attack was taking place did nothing to calm my fears.


Cell service was down at times in the Boston area. Thank God for Facebook. I was able to find out that all of our loved ones were safe and sound. Prayers thanking God were whispered. For the rest of the day and the days following, I continued to watch the story unfold. A story that is still unfolding today, almost two full weeks later.


Boston is a special place to my fiancé and I. Besides having loved ones in that area, it is my fiancé's hometown. As a child, I dreamed of living there and any road trip east from my western Massachusetts home to see the Boston Red Sox play or to visit the Boston Science Museum was special. Over the past five years, I have spent more and more time in the city. I used to see a medical specialist there and I frequent a Sjogren's Syndrome support group on a regular basis. Since Chuck and I have been together, we have spent a lot of time exploring the city. It helps that I have my own personal tour guide who knows how to get to almost anywhere in the city! It has become a special place for us and one that Chuck still calls home.


When the bombing happened, I felt like someone had attacked our home. I didn't know any of the people killed or injured but yet, it felt personal. I remember the devastation I felt on 9/11 and again during the Newtown, CT tragedy, but this was different for me. This was my home state. Boston may be over an hour and a half away, but those were my people that were hurt and killed. Those were my streets that carry the red stains of blood from this cruel act.


Yesterday Chuck and I went to a scheduled Sjogren's Syndrome support group meeting at Tufts Medical Center in Boston. The meeting was in the morning and we planned to spend the rest of the sunny day walking around the city, which included paying our respects to those who lost their lives and were injured. We didn't know for sure if there was a place at or near the finish line site to do this but we wanted to try. Chuck printed up a photo of Boston he had taken years ago and superimposed a quote about strength and adversity over the photograph. Something that may bring a little comfort to anyone who reads it.


There was a makeshift memorial right around the corner from the finish line in Copley Square. It was quite the scene. There were still news trucks lining the street and all of Copley Square had different memorials. There were pairs upon pairs of sneakers hanging by their laces from the fence as a tribute to the runners. Flowers, stuffed animals, and Boston sports caps abound. It was truly a tribute to those fallen and those injured.


As I was walking amongst the displays, it struck me. I was shoulder to shoulder with people. The area was very crowded but yet, it was quiet. I have never been in a crowd of people that was so quiet. Copley Square, Boston and the loudest sound you could hear was just the cars driving by. You could hear the hushed whispers here and there between people. A man telling a woman that it was OK to cry. A father instructing his daughter where to place her beloved stuffed owl that she wanted to leave at the memorial. You could hear the quiet sniffles. You could see the tears falling from underneath the lower rim of people's sunglasses.


This was a sacred space.


Copley Square, Boston is no longer a place of fear and terror. It is now a place of remembrance, respect, and solidarity.


We then proceeded around the corner to stand on the curb at the worn, painted finish line. I looked across the street to the boarded up store windows that were smashed by the explosion. I looked at the storefront of a shop where injured people made their way into after the explosion. My mind flashed back to the explosion images I had seen on television. As I stood on that curb I couldn't help but think of how it must have felt to be one of those spectators or one of those runners.


The fear.
The chaos.

Ordinary citizens enjoying what should have been an ordinary day.

Before evil took over.

Before that evil was then obliterated by the tenacity and courage of all the men and women of Boston, Massachusetts.

I said a prayer.


After leaving Copley Square, we decided to head back towards the Boston Public Gardens and Boston Common and include a pit stop for lunch along the way. As we were strolling along the Garden, I was struck by the amount of people out and about. People from the city, and who knows where else, enjoying the warmer weather. Taking swan boat rides. Playing frisbee. Single people, couples, families, and pets just enjoying the gifts that this area of the city provides. Showing their resilience while at the same time making a very strong statement.