June 19, 2012
"There are two primary choices in life: to accept conditions as they exist, or accept the responsibility for changing them." ~ Dr. Dennis Waitley 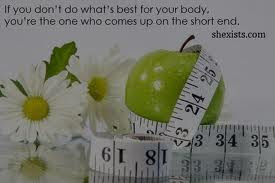 So I have been writing a lot over the past six months about nutrition and exercise because I am on a mission, and I mean a SERIOUS mission, to improve my autoimmune symptoms as much as I can by eating healthier and exercising my very unpredictable and sometimes seemingly frail body. As all journeys are, this particular one is an ever changing and evolving journey. This blog entry is about my most recent change.

In January of this year I changed to a gluten and dairy-free diet with a focus on also reducing refined sugars and processed foods. Then around April, I joined a new gym with the intention of getting myself on a very regular exercise program which would help me to build a stronger body and in the process, alleviate some of the overwhelming stress I had experienced over the previous several months. Despite many obstacles with my physical abilities at times, overall my exercise program has been quite successful in terms of meeting the objectives and goals I had set for myself.

Although the primary focus of these lifestyle changes was, and still is, for the purpose of improving my health and combating this god awful autoimmune illness, there is more to the story. In addition to wanting to be healthier, I was sick of being fat. Sick of being the biggest person in the room. Sick of never finding the right clothes to fit me in a flattering way. Sick of looking in the mirror and knowing that I didn't like the image looking back at me. I had lost a good amount of weight, thirty-six pounds, on my own over the past three years but I had stalled out in my weight loss for a variety of reasons. However as I was making these dietary and fitness changes since January, I was also determined to not fall into the diet trap again. The one I had spent so much time in for most of my life. You know, the one where you start a diet, do OK for a while, fall off the wagon, and start hating yourself all over again. I wanted my lifestyle changes to be about taking good care of my body and not about dieting.

As luck would have it, a dear friend of mine had recently started Weight Watchers and she told me about their new program. I had been to Weight Watchers before and did well with it for a period of time. And then I would stop following the program or start cheating a lot and I would fall off the wagon. I was also concerned about the gluten and dairy-free issue and how I would pull that off. However this friend of mine is also gluten and dairy-free so she was my inspiration for believing that it could be done.

I sat down and seriously thought about if I started going to Weight Watchers, would it work for me? What if it didn't work for me with all the steroids I was on? What if I couldn't stick with it? What if, what if, what if. This is what I finally decided. First, I had to stop using the steroids as an excuse for being overweight. Yes, they can cause weight gain but let's face it, I was severely overweight before I ever popped a prednisone tablet into my mouth.


Secondly, things are different now than they were when I was on Weight Watchers years ago. My health is a mess and I have a lot more to lose now. My autoimmune illness is not weight related but I have spent so much friggin' time being sick that I want to be as fit and healthy as I can possibly  be so that I can enjoy my good days more fully. In addition, I don't want to have to deal with any weight related health issues down the road on top of the health issues I already have. I want to be in the best possible state of health that my autoimmune illness will allow. I have never been this motivated to change.

So on my 41st birthday, May 3rd, I went to my first Weight Watchers meeting. And you know what? It felt good to be there. To be taking yet another proactive step in an attempt to create a healthier version of myself.

I have to admit, between following Weight Watchers and staying gluten/dairy-free, the past seven weeks have not always been easy. I have come to figure out that even though I was eating a lot healthier over the past six months, my portion sizes were ridiculously out of wack. I found that the new Weight Watchers program focuses more on eating whole natural foods than it used to and I really liked that fact. I have found a lot of emotional support in the group meetings and through the message boards online to help change some of my unhealthy eating habits and to learn to eat with purpose. Eat to live rather than live to eat.

And it is working. Looking at the numbers, I have lost twelve pounds in the past seven weeks, despite being on steroids for five of those weeks. This puts me back at the weight I was at seven months ago which is when I started my last round of steroids. More importantly though, I feel better about myself and what I am eating. I am starting to like the face looking back at me in the mirror every morning. Not because she is twelve pounds lighter but rather because she is working hard to be the best that she can be.


She is defying the steroid odds.

She is defying her own self doubts.

She is in control.

It is a much better place to be.