November 07, 2012
Chains do not hold a marriage together. It is threads, hundreds of tiny threads which sew people together through the years. ~Simone Signoret 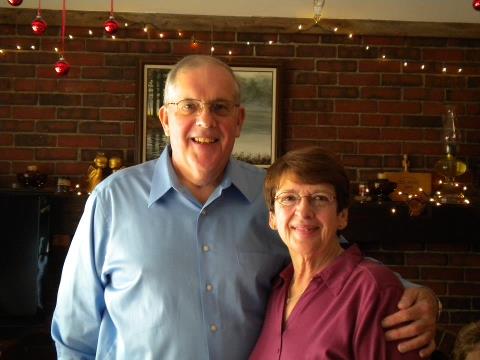 On November 7, 1970, two people pledged their love and commitment to each other. For better, for worse. For richer, for poorer. In sickness and in health.


Today, they celebrate forty-two years of marriage. Forty-two years. Can you imagine? I can't. Maybe because in order to achieve that, my fiance would have to live until he is ninety-seven and I would have to make it until I am eighty-four. Heck, I can't even picture fifty years old at this point!


But those two people, once in their early twenties, have made it that long and I hope and pray that they make it many more years together.


Like most marriages, their marriage has not been perfect. There have been many arguments and conflicts. There were multiple job losses and sleepless nights. The early years brought very difficult financial times, including standing in line at the A&P supermarket with their food stamps; trying to do whatever it took to keep their heads above water.


Despite the fact that both my brother and I are divorced, we both learned a lot from my parents during those early years and from the years since then. I can't really speak for him, but they have taught me that marriage is a true partnership. They have demonstrated that with this partnership and a strong work ethic, it is possible to make a better life for yourself and your family. I am proud of how far they have come since those early years.


There have also been a lot of scary moments. A car accident and open heart surgery for my dad. Ovarian cancer and breast cancer for my mom. Moments that caused chaos and rattled the very foundation of our family. Moments that also strengthened their love as a couple.


Until recently, my mom has always been the talker and the emotional one in the partnership when it came to my brother and I, while my dad tends to be more reserved with his feelings. Most of the news and information in the family tends to go through my mother. I think that is true for a lot of families in that generation (they are in their sixties) but yet, when I sit here and think of the expressions of love I have verbally heard expressed in reference to each other, it is my father's voice that echoes the strongest with me.


The year was 1997. After I had been in remission from a cancer diagnosis, my fiance at the time had suddenly broken off our engagement and relationship. Since we lived in what was originally his house, I went to live with my parents until I could figure out what I was going to do. He had told me that he had realized he had never really loved me. I was emotionally devastated. I remember floating in my parent's backyard pool telling my dad this and how maybe my ex was just confused and would eventually come to his senses. I know, I know. I was being foolish. My father just looked me straight in the eye and said "Chris, when you love someone, you don't say things like that. I have never ever told your mother I do not love her.You don't do that."


It has been interesting to watch my parent's marriage evolve over the years since my brother and I have left the house and especially since they have retired. It seems like in a way, they have renewed the romantic part of their marriage. My mother refers to my dad as "her love" on Facebook and my dad was proudly telling me yesterday on the phone about the large bouquet of flowers he thought to order for my mother to celebrate their anniversary today. All I can say is, "who stole my parents??"


Maybe it is because there is no longer the chaos and stress of working full-time jobs and raising children. Perhaps it is because they now have more time to appreciate each other rather than trying to figure out how to just get through the day and pay the bills. Whatever it is, it makes me happy. It makes me happy to see that despite the odds and despite the challenges this world presents to us every day, true love can win out and last a lifetime.


Thank you mom and dad.