November 05, 2012
"Music exalts each joy, allays each grief, expels diseases, softens every pain, subdues the rage of poison, and the plague." ~ John Armstrong 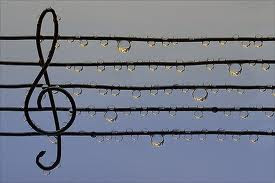 Grief is a sneaky invader; creeping up on you when you least expect it sometimes. Maybe it makes its guest appearance after a random conversation or during those still hours when the house is quiet. Sometimes grief is over the loved one we have lost. Sometimes grief comes in the form of losing something that we were once capable of doing.


My invader made a visit last Thursday. I wasn't prepared for it but then again, are we ever really prepared?


I understood the circumstances of why I was feeling particularly sad last Thursday. I had been spending some time last week with a friend of ours at doctor's appointments. He had asked me to be, as a nurse and as a friend, a second set of ears in preparation for a major upcoming surgery he was having this week. A surgery he was going through without his wife, who suddenly passed away at such a young age; almost two years ago.


His wife, my friend.


Of course I have thought about my friend in these past two years, but it has been a long time since I have mourned her. I had gone through my grieving process and I had chosen to remember her with fond memories and joy. However last week made me stop and think about how very unfair life can be sometimes. It didn't seem right that he couldn't have her there with him by his side. What a loss this world experienced when she left us. The grief felt palpable once again.


Once I came home from the second day of doctor's visits, the house was quiet when the grief hit me and I decided that maybe the best way to deal with it would be to go on my computer and browse through some photos and videos of my friend. Remember her with laughter. Like the photos she took of me eating soggy grilled asparagus. It looked like I was eating worms. Don't ask! I eventually ended up scanning YouTube for videos as our church posts its services and choir performances videos on there.

A tough place for me to be lately. Actually, I haven't been there as much.


My friend was in the choir and she was the one responsible for getting me involved in our church choir. Singing for God has been one of my steadfast passions until recently. I say recently because not being able to sing for the past few months, due to struggles with my autoimmune illness, has been a loss for me. Sometimes the difficulty has been with my lungs, fatigue, the dryness of my vocal cords, or issues with reflux affecting my throat. The fact that this has happened to other Sjogren's patients has just discouraged me all the more. A lot of the time, I truly cannot physically sing and sometimes it is just energy that I cannot afford to spend that particular day or week. Although I have to be honest, I do wonder if occasionally I am just so exhausted and discouraged, that it is just easier to sit it out. Don't tell anyone though because most of the time, people don't understand that part of having a chronic illness unless they have experienced it themselves.

As I was looking through these church videos, I came across a YouTube video of my fiance and I singing the song "Mary Did You Know?" at our church Christmas cantata last year. A cantata dedicated to my friend's memory. A song that has become significant to me because I had to overcome respiratory issues to be able to pull off that performance. It was a good performance. And I was grief stricken again. Because when I heard my voice on that video, I felt like physically, I wasn't in the same place as last year. Actually I know I am not. My illness has taken more from me physically this year, including at times, the quality of my voice. Is that selfish? Maybe. Because let's face it, compared to my friend not being here, it's not as significant. But it is still my loss.


Fast forward to Friday. I am sitting at a Women of Faith conference in Hartford, CT. An incredible event that you will probably hear more about at a later date. I am thoroughly enjoying listening to a Christian comedian. A man named Mark Lowry.


Mark Lowry.
Why does that name sound familiar?


I decide to stop torturing myself trying to place the name because this man is so funny, I don't want to miss a word that he says. He's that good.


What I didn't realize, until he opens his mouth to do so, is that this man can also sing. What a voice on him! What a talent to be able to make people laugh and to be able to sing like that.


What I also didn't realize? That this man write songs.


How do I know this? Because at the end of his performance, he sang a song that he wrote. A song that over thirty recording artists have performed since he wrote it.


Now you can say what you will about coincidence and such but here are the facts. I had tickets for this conference for months, but did not know that the man who wrote the lyrics to this song was going to be there. I had not watched the video of that Christmas cantata in at least eight or so months. I also did not know about my friend's surgery until last week.


So I don't believe this was all coincidence. I am typically not a person who makes radical proclamations and I certainly do not typically write about them publicly online; although maybe I will more often now.


I believe they were telling me that as long as I am not harming myself, to keep singing as best as I can, when I can, but to push a little harder.


I believe they were telling me to stop comparing myself to other people. To get back to my speech therapy exercises, to do some research online, to stop reading about what other Sjogren's patients can and cannot do for a while.


And finally, I believe they were telling me to believe a little less in my illness and a little more in myself.